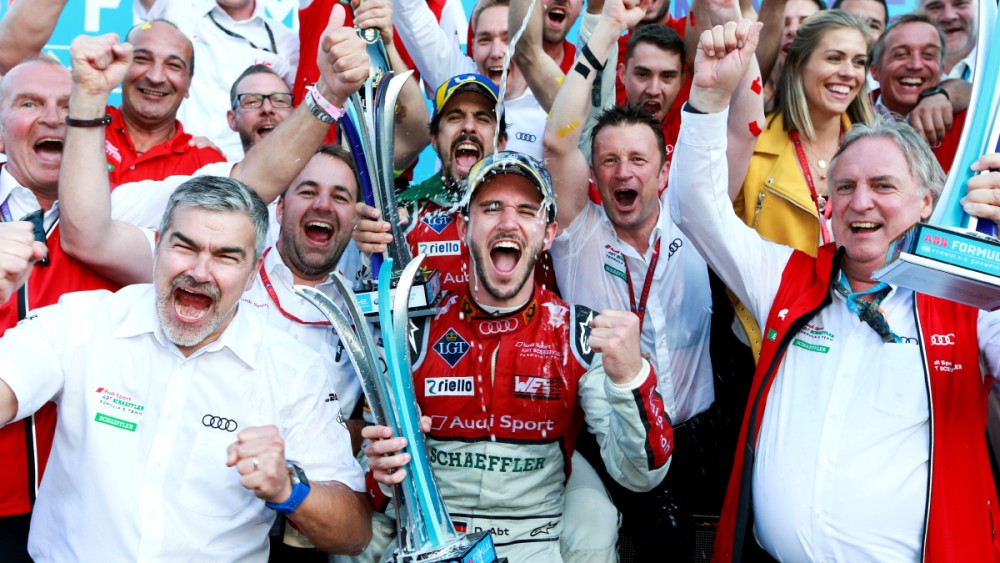 The Audi Sport ABT Schaeffler squad celebrated a dream result with a one-two finish in the home race in Berlin in the ABB FIA Formula E. Daniel Abt proved victorious with a flawless start-finish victory. Team mate Lucas di Grassi was 6.758 seconds behind in second place in the ninth race of the season. The most applause and celebrating for this came from one of the packed grandstands in the finish area, from where the 400 Schaeffler employees – including Klaus Rosenfeld, Chairman of the Executive Board of Schaeffler – dressed in green-white witnessed only the second ever one-two in the history of Formula E.

"What more could we wish for than a one-two in our home race – and this immediately in front of 400 of our Schaeffler colleagues, who are inspired by electromobility and work on the mobility for tomorrow,” asked Prof. Peter Gutzmer, Chief Technology Officer at Schaeffler. “We know since the first race that we developed an excellent Formula E drivetrain together with Audi. And after we were regular guests on the podium again in the last few races, today everything worked out in this one-two. In fact absolutely everything because with pole position and fastest race lap for Daniel, we became the first ever team in the history of Formula E to score the maximum number of points possible.”

“What shall I say? That was probably the best day of my career: pole position, victory and the fastest race lap, and on top of this Lucas in second place – all this in our team’s home race. It’s just completely crazy. I saw the flags waved by the Schaeffler employees in the grandstand every lap and just enjoyed it,” said Daniel Abt. In March, the 25-year old Kempten born racer celebrated his first victory in the innovative electric racing series in Mexico in the fifth race of the season – the first German driver ever. For team mate Lucas di Grassi, the defending Champion, it is his 24th podium result in 42 Formula E races and his fourth consecutive second place. The 33-year old Brazilian started the race from fifth on the grid and demonstrated his exceptional class yet again with some fantastic overtaking maneuvers. In the drivers’ classification, Abt holds fourth place, di Grassi sixth before the last three races of the season – one in Zürich and two at the finale in New York. In the teams’ classification, Audi Sport ABT Schaeffler moved up to second position.

Technology “made by Schaeffler” is found in the Audi e-tron FE04. The Schaeffler engineers developed the core element of the car together with Audi: the combination of motor and gearbox. Schaeffler is official technology partner of the team Audi Sport ABT Schaeffler in the innovative electric race series. Schaeffler also underlines its position as pioneer of electromobility on the race track since the first season 2014/2015. Since the technical regulations were opened up for the second season 2015/2016, specialists from Schaeffler developed the drivetrain for the race car of the only German team. For Schaeffler, Formula E is one of many fields of activity around which it works to form a visionary and sustainable mobility for tomorrow.