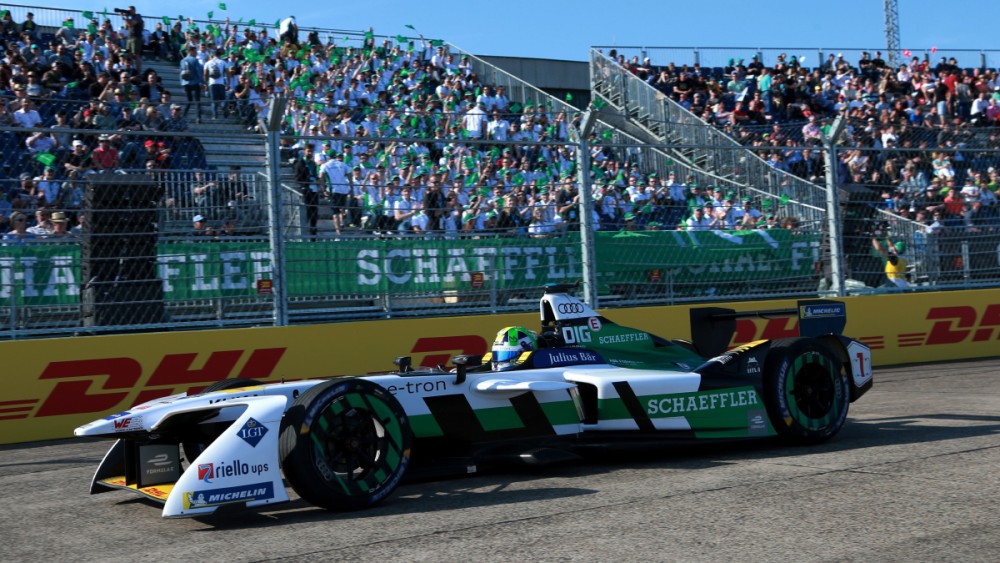 The ABB FIA Formula E Championship is turning onto the finish straight in Zurich. From a historical perspective, the penultimate event of the season on June 10 has particular significance. In racing, Team Audi Sport ABT Schaeffler intends to confirm its strong form with more top results.

Formula E is proving its uniqueness once more, bringing motorsport back to Switzerland – and right into the heart of the city. As a consequence of the 1955 tragedy at Le Mans, circuit races were banned in the Alpine country for more than 60 years. Formula E is the first series to have been granted a racing permit again: a strong statement that shows that the development of new target groups in motorsport is possible in line with environmental compatibility.

Race ten of twelve in the 2017/2018 season will be held on a 2.465-kilometer temporary circuit in Zurich – along the Lake Promenade, through the financial district and the city center. In Romanshorn on Lake Constance, about an hour’s drive east of Zurich, Schaeffler operates a sales office with 45 employees.

Team Audi Sport ABT Schaeffler is traveling to Zurich in good shape. Since the fifth race weekend in Mexico at least one of the two drivers, Daniel Abt or Lucas di Grassi, has been on podium. The team most recently experienced its highlight of the season to date in Berlin: Local hero Abt achieved the rare feat of scoring a “triple,” consisting of pole position, victory and the fastest race lap. Di Grassi completed a perfect weekend as runner-up.

Zurich is the 19th Formula E venue. The city, with some 400,000 residents, Switzerland’s most populous one, is regarded as one of the most livable places on Earth. Not least due to a forward-thinking mobility system. Zurich has developed a strategy paper that pursues six goals by 2025 including an increase of the share of local public transportation, pedestrian and bicycle traffic in the total traffic volume. Actions in the area of automobile traffic are primarily focused on avoiding and shifting trips and thus the reduction of CO2 emissions.

Suspense galore guaranteed
Twelve races at ten events on five continents – the calendar of the innovative Formula E electric racing series is as extensive this season as never before. Three locations – Rome, Santiago de Chile and Zurich – are hosting Formula E races for the first time. The schedule at each event is tight: free practice, qualifying and the race(s) take place within the space of just a few hours.

Since the 2014/2015 inaugural Formula E season, Schaeffler, with its commitment in Formula E, has been emphasizing its position as a pioneer in electric mobility on the race track as well. Ever since the technical regulations were opened up for the second season, 2015/2016, specialists from Schaeffler have been responsible for the development of the powertrain in the team’s race car. The current model, the Audi e-tron FE04, includes technology “made by Schaeffler” as well. Together with Audi, engineers from the technology group developed the key component of the vehicle: the motor-generator unit.