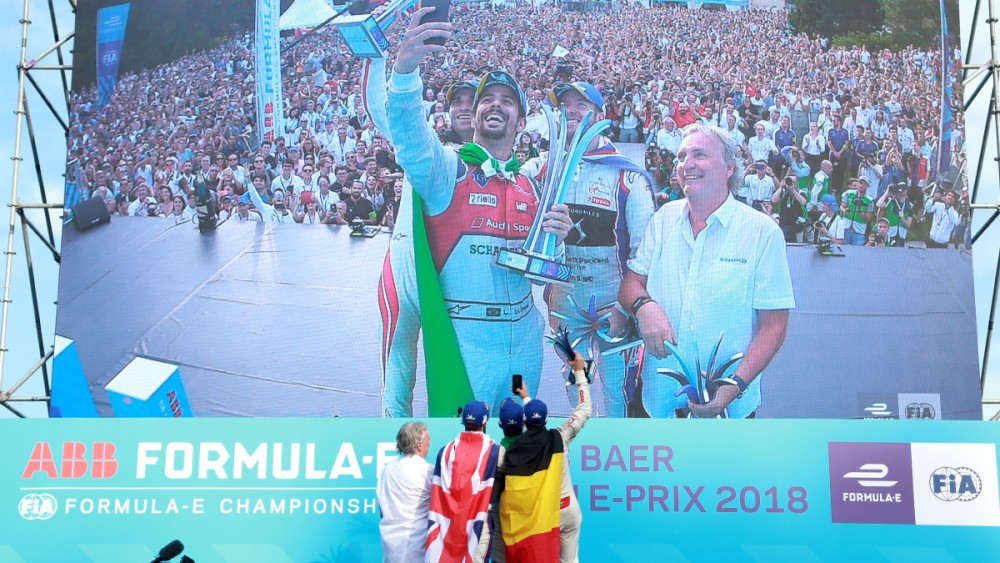 Reigning champion Lucas di Grassi wins the first international circuit race in Switzerland since 1954 in commanding style. For the Brazilian, following four second places in succession, it marks the first victory this season in the innovative, fully electric racing series. His teammate, Daniel Abt, has to make an unscheduled pit stop to change the rear wing, depriving him of his chances of scoring a top result on the shore of Lake Zurich – the two-time winner this season places 13th.

“I’m at a loss for words. After having scored the best team result in Formula E history in Berlin three weeks ago, we’re now finally seeing our champion on the top step of the podium again. And those who saw the race also know why Lucas is driving car number one and why he belongs there, on the top step – what fantastic overtaking maneuvers that made him advance from fifth to the front,” says Prof. Peter Gutzmer, Chief Technology Officer at Schaeffler, expressing his congratulations. “And in an event that not only caused a sensation due to this impressive crowd. We’re used to superlatives in Formula E but what the Swiss have set up here in the heart of Zurich to celebrate a modern motorsport comeback is awesome. To anyone who’d like to feel the spirit of an innovative form of mobility for tomorrow I can only recommend that they visit Formula E.”

For Lucas di Grassi, this marks the seventh victory and 25th podium finish in the 43rd Formula E race. “Well, it was definitely time for this one step further up on the podium. I knew after four second places in succession that it’s in my hands again. And of course I’m happy that I’ve now won the first major race in Switzerland in more than half a century. I’m dedicating this victory to my unborn son who will come into the world in a few weeks from now,” says the jubilant 33-year-old Brazilian. On July 14 and 15, the two final rounds of the 2017/2018 season will be held in New York City. Neither Lucas di Grassi nor Daniel Abt are still able to win the drivers’ classification but in second place of the teams’ classification the deficit to the leading Techeetah team has been reduced by another eleven to 33 points – 94 points are yet to be awarded in the final races on Saturday and Sunday in the U.S. metropolis. Prof. Gutzmer: “We’ve been in Formula E now for four years and have celebrated many victories plus the drivers’ title. And of course, following a third and two second places, we’re going to leave no stone unturned to enter our name in the history books as champion in the teams’ classification as well.”

The Audi e-tron FE04 contains technology “made by Schaeffler.” Together with Audi, Schaeffler engineers developed the vehicle’s centerpiece: the combination of the motor and the transmission. Schaeffler is the official technology partner of Team Audi Sport ABT Schaeffler in the innovative electric racing series. Since the 2014/2015 inaugural season, Schaeffler has been underscoring its position as a pioneer in electric mobility on the race track as well. Since the technical regulations have been opened for the second season, 2015/2016, Schaeffler specialists have been developing the powertrain for the race car of the only German team. For Schaeffler, Formula E is one of many fields in which the company actively works on visionary and sustainable mobility for tomorrow.