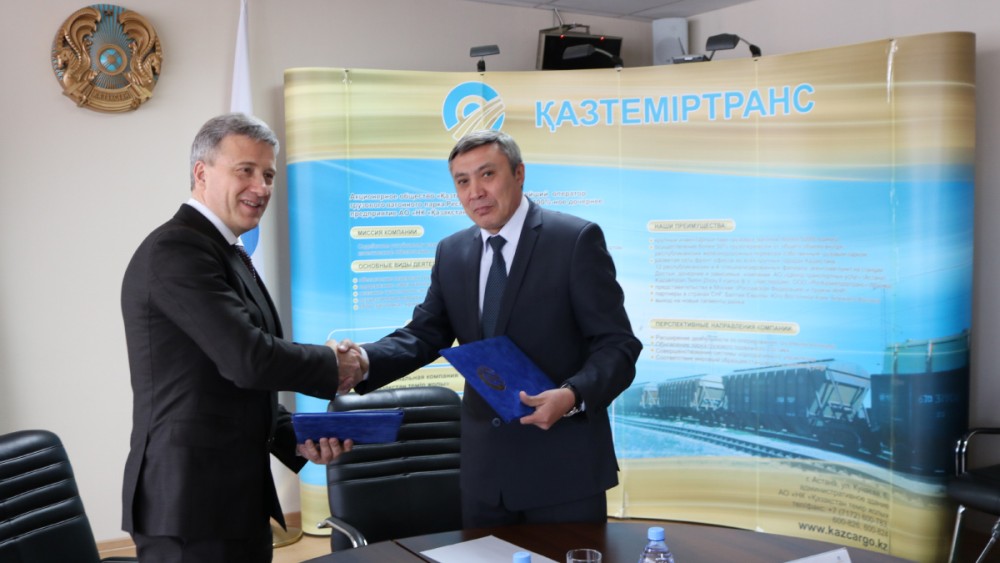 From left: Maxim Shakhov, Managing Director of Schaeffler Russland GmbH and Kairat Saurbayev, President of JSC „Kaztemirtrans“ after the signing of the contract

The Schaeffler Group and the Kazakh goods wagon producer JSC “Kaztemirtrans”, a part of Kazakhstan State Railways, signed a contract on the reconditioning of axlebox bearings at the end of May. Tens of thousands of axlebox bearings are in use in Kazakhstan. These are to be reconditioned in the coming years in Schaeffler’s plant in Ulyanovsk, Russia.

“Schaeffler is supporting Kazakh railways’ modernization process with its Industrial division’s reconditioning program”, says Prof. Dr. Rainer Lindner, President of the Central and Eastern Europe/Middle East and Africa subregion at Schaeffler, on the occasion of the signing of the contract by Schaeffler Russland GmbH. This is an important step for Kazakhstan in establishing itself as a hub along the Chinese government’s One Belt One Road Initiative”, says Rainer Lindner. This project marks the Schaeffler Group’s first participation in a project as part of the New Silk Road Initiative, which is intended to modernize industry and transport facilities in Kazakhstan and Central Asia.

The reconditioning of bearings based on operating experience generally allows technical improvements to be made. Schaeffler has developed, for example, a sealing system for operation in temperatures as low as -60°C. This allows the specific requirements of the Trans Eurasian transport corridor to be met even better.

Schaeffler is making an important contribution to reducing CO2 in the transport chain through the reconditioning of axlebox bearings, a service that is also available for competitors’ products. After all, the energy-intensive production of a new bearing is not required. Schaeffler can also apply a DMC code to the bearing during reconditioning if requested by the customer. This allows lifetime documentation to be created for the product. The operating and maintenance history enables an extension of maintenance intervals coordinated with the operator and ultimately a reduction in transport costs.

“The use of TAROL bearings offers a further opportunity to increase maintenance intervals. These tapered roller bearing units have a compact design and are supplied greased and sealed. They therefore have a longer effective operating life compared with the axlebox bearings usually used in freight traffic”, says Dr. Michael Holzapfel, Vice President Business Unit Railways Europe.