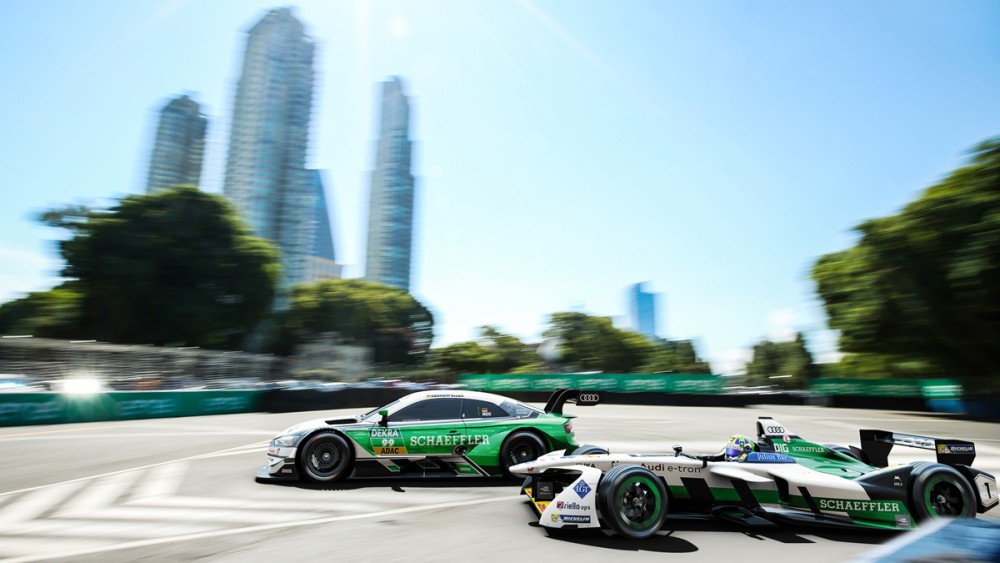 Team Audi Sport ABT Schaeffler still has a big chance of winning a title in Formula E while in the DTM Mike Rockenfeller will be racing on one of the tracks he has previously been particularly successful on. The weekend of July 14/15 will be one of motorsport galore for Schaeffler.

Electric mobility on the race track in the ABB FIA Formula E Championship and gripping top-caliber touring car racing in the DTM – Schaeffler in 2018 is demonstrating its motorsport expertise in a brace of racing series, as the technology group will be represented at two different events for the second time this season.

Formula E is holding its 2017/2018 finale in New York City. The event is special in that, as in the opening round in Hong Kong, a separately classified E-Prix will take place on Saturday and Sunday. Team Audi Sport ABT Schaeffler most recently delivered strong performances. In the past six rounds, at least one of the two drivers, Lucas di Grassi and Daniel Abt, mounted the podium, a string of success that culminated in the one-two result clinched at Schaeffler’s home round in Berlin. With a maximum of 94 points yet to be awarded, the team has a realistic chance of making up its deficit of 33 points in the teams’ classification on the 2.373-kilometer Brooklyn Circuit.

More than 6,000 kilometers east of New York, at Zandvoort, races nine and ten that mark the DTM season’s midpoint will be held. Schaeffler brand ambassador Mike Rockenfeller in his Schaeffler Audi RS 5 DTM will travel to the venue as the Audi driver with the highest points score. Rocky has fond memories of the event in the Netherlands, having celebrated two of his five DTM victories at Circuit Zandvoort. The 4.307-kilometer track is located in the middle of dunes directly on the North Sea coast. The drivers have to watch out for gusty winds and sand that is blown onto the track. The grip level may vary from lap to lap.

Schaeffler and motorsport – a success story

In both series, Schaeffler looks back on a past with plenty of titles. Ever since the inaugural 2014/2015 Formula E season the technology group has been underscoring its position as a pioneer in electric mobility on the race track as well. Last year, Schaeffler driver Lucas di Grassi won the title. In the DTM, which uses conventional internal combustion engines, Schaeffler started to support drivers and teams with motorsport and technology know-how in the early years. Now, in the eighth year of its commitment, the company is the naming sponsor of the Schaeffler Audi – the 2011 and 2013 championship winning car.