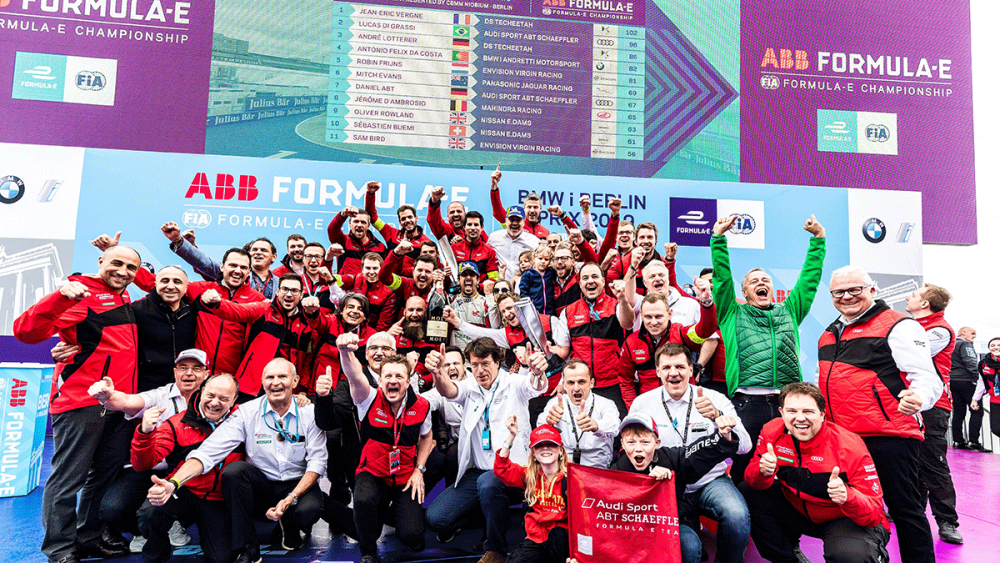 With an impressive performance and the second victory this season for Lucas di Grassi, Team Audi Sport ABT Schaeffler thrilled the crowd at its German home round in Berlin-Tempelhof. Also sitting in the fully occupied grandstands were 400 Schaeffer employees who, together with CEO Klaus Rosenfeld and Matthias Zink, CEO Automotive OEM, again formed a “green wall” of support and broke out in rounds of cheer each time the team passed by the grandstand. Di Grassi’s teammate, Daniel Abt, finished sixth after having started from position six on the grid.

During the 37 rounds, winner Lucas di Grassi overtook the two rivals who had started in front of him and, leveraging the efficiency of the powertrain in the Audi e-tron FE05 jointly developed by Audi and Schaeffler, scored his tenth Formula E triumph in total in commanding style with a near-two-second advantage. As a result, the Brazilian, who had won the title in 2016/2017, improved to second place in the drivers’ standings before the season’s three final races. In addition to the 25 points for victory, the 34-year-old pocketed an additional point for the fastest race lap and is currently only six points off the top spot. “It was a very strategic race in which I had to pay a lot of attention to efficiency. For one, on energy consumption and for the other, on the tires. I managed to do that perfectly in front of this dream crowd. I heard the fans in the ‘green wall’ cheer on each lap – that was awesome. Now, we’re going to party, Berlin here we come!” di Grassi beamed, following the official winner’s photo.

“We again invited 400 of our employees to the event and, needless to say, were secretly hoping that – like in 2018 – we would be able to celebrate a victory. And then Lucas makes such an impressive showing, demonstrating the efficiency and performance of our Formula E car once again. I’m thrilled. Daniel scored valuable points too – so now, in second place of both classifications, we’re in a really good position for the final stage of the title race,” said Matthias Zink, CEO Automotive OEM. Chief Executive Officer Klaus Rosenfeld said: “We were represented in Berlin with some 400 employees from 26 German locations. The commitment, motivation and enthusiasm of our team for electric mobility and Formula E are impressive, plus a first place for Lucas di Grassi and the Audi Sport ABT Schaeffler team: a fantastic achievement. A cordial thank you to everyone who was involved in this!”

With a total of 34 points in the race at the former Berlin-Tempelhof airport, reigning teams’ champions Audi Sport ABT Schaeffler advanced to second place as well, now only 25 points off the top spot. The innovative electric racing series will continue with the third from last race on June 22 in Bern, Switzerland. Two races in mid-July at the finale in New, USA, will mark the end of the season.

Formula E is an FIA-sanctioned motor racing series for fully electric cars. In 2018/2019, Formula E season five, eleven teams and 22 drivers are on the grid. Formula E races worldwide on temporary circuits in the hearts of metropolises such as Hong Kong, Berlin and New York City. From December 15, 2018, until July 14, 2019, the ABB FIA Formula E Championship is holding 13 rounds at twelve venues. Each race lasts 45 minutes, plus one lap.