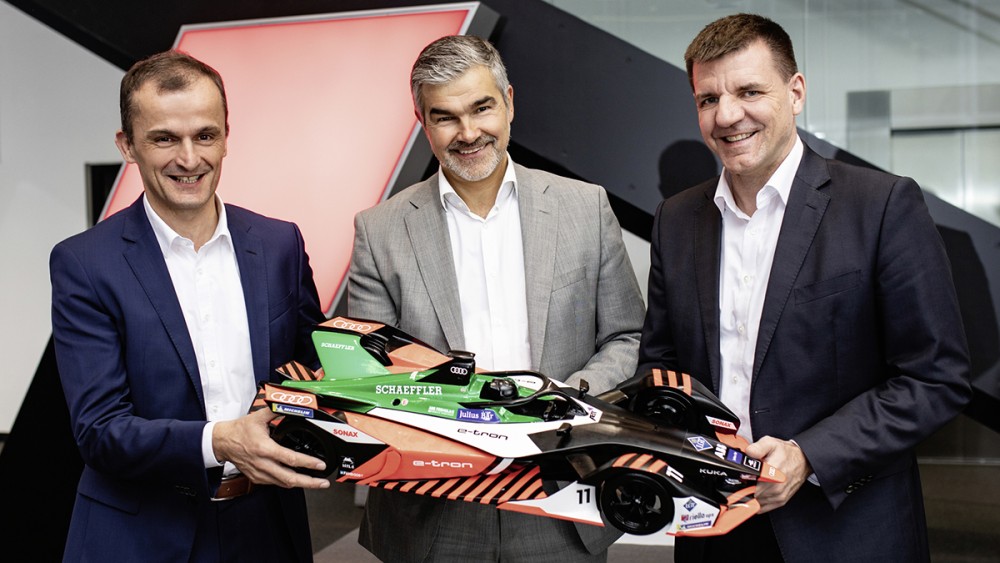 Schaeffler and Audi are set to remain a formidable Formula E team in the future. This agreement was concluded between the globally active automotive and industrial supplier from Herzogenaurach and the brand from Ingolstadt. Joint development work on the Audi e-tron FE07 for the series’ seventh season, starting out in autumn 2020, has already begun. This is one of the most successful partnerships in Formula E: Since the series made its debut in the fall of 2014, Schaeffler has been the technology partner of Audi Sport ABT Schaeffler. The team has set benchmarks both on the track and on the sidelines, with 40 places on the podium and more than 1,000 points before the start of the sixth season. Schaeffler puts the expertise gained from this fully electric racing series into its development work.

“Schaeffler, Audi, and Formula E are a combination that was perfect from the very start”, explains Matthias Zink, CEO Automotive OEM at Schaeffler. “As a company, our intention is to use our drive train and chassis technologies to innovatively shape sustainable mobility. Formula E is an ideal platform on which to present these ideas for future electric mobiliy and measure our performance in a competition of the highest sporting caliber. And at the same time, our involvement has been delighting both fans and employees alike for years.”
Initially a partner to the private ABT Sportsline team for the first three years, Schaeffler has been developing drive trains for Formula E together with Audi since it joined the series as a factory team in the fall of 2017. The combination of engine, transmission, inverter, and software represents the core of the vehicle, which in all other aspects is identical for all teams. In the future, Schaeffler will continue its involvement as a technology and development partner, primarily in fields such as transmission, engine, and drive concept development and by providing support in test rig-based work and prototype construction as well as bearing development and production. “I am delighted that the formidable team of Audi and Schaeffler will continue during the next few years”, enthuses Dieter Gass, Audi’s head of motorsport. “We have already achieved a great deal together, but the ever-increasing performance density in Formula E means we still have huge challenges ahead of us. The fact that we are able to join forces and tackle the development of the Audi e-tron FE07 for season seven as an experienced team is therefore of major significance.”

For Schaeffler, this electric racing series is the ideal test laboratory for developing mobility solutions for tomorrow. After all, only the technology winners in that arena can later hope to be among the leaders in the volume production race. “Formula E gives us a wealth of expertise, which we then transfer from the race track to our development departments”, explains Dr. Jochen Schröder, head of Schaeffler’s E-Mobility business division. “The relevance of this expertise in the fields of comprehensive drive systems, electric motors, power electronics, and transmissions is already demonstrated by the Schaeffler electric axle drives that we have been producing for the Audi e-tron since 2018, and this expertise is also being integrated into electric drive systems and components for the future that are currently in volume production development at Schaeffler.”