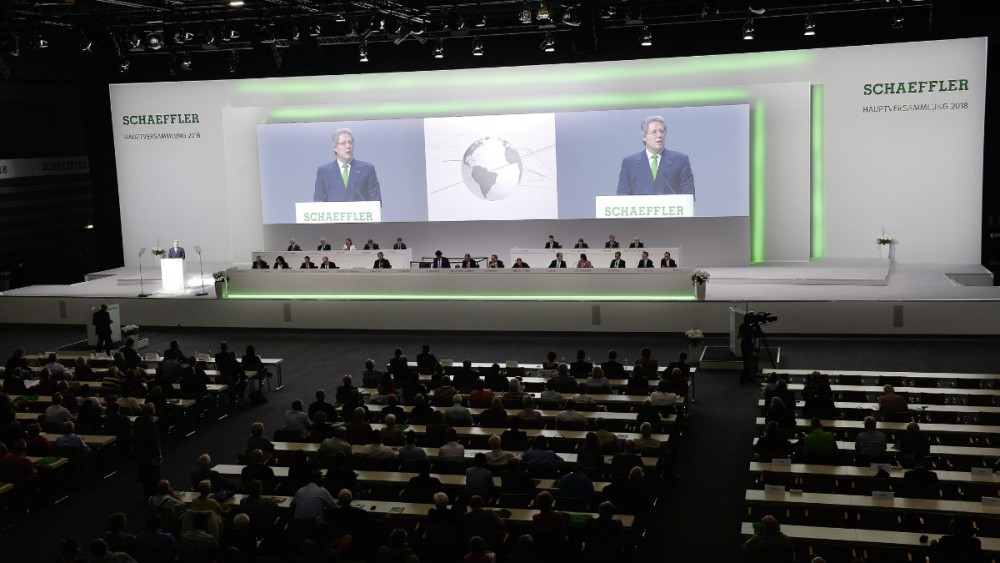 For the third time, Schaeffler AG held its annual general meeting at Frankenhalle in Nuremberg, and for the third time since the listing, shareholders had the opportunity to vote for a dividend increase. The dividend per common non-voting share was raised from 50 cents in the prior year to 55 cents, an increase of 10 percent. This represents a dividend payout ratio of about 35 percent of consolidated net income, in the middle of the target 30 to 40 percent range communicated earlier.

The CEO of Schaeffler AG, Klaus Rosenfeld, reported on the course of the 2017 financial year, briefly outlined the start to the year 2018 and the guidance for the current year, and finally discussed several initiatives of the program for the future, the “Agenda 4 plus One”, in more detail. Rosenfeld also cited the agreement for the future negotiated with IG Metall a few days ago as a further example of how the Schaeffler Group is preparing for the future.

The speed and success with which the Schaeffler Group is moving toward “Mobility for tomorrow” was also illustrated by the concept E-vehicle “Schaeffler Mover”, which made an appearance at the annual general meeting. The electric vehicle, which is also going to move autonomously, is designed to help ease the growing traffic in metropolitan areas. The vehicle has the ability to turn on the spot and park sideways, and a variety of vehicle bodies make it possible to flexibly configure and optimize it for transporting people and goods. The company is currently studying the potential of developing the concept to the point of volume production.

Although 2017 was “a year with bright as well as dark moments and a lot of headwind”, Rosenfeld termed 2017 a successful year, pointing to record results: The Schaeffler Group’s revenue increased by 5.9 percent at constant currency to 14 billion euros, the highest revenue in company history. All divisions and regions contributed to the increase. Net income also set a historical record of 980 million euros, up 14 percent from prior year, while the EBIT margin before special items dropped 1.4 percentage points to 11.3 percent. The Schaeffler Group’s total capital expenditures amounted to approximately 1.3 billion euros in 2017, setting yet another record. In addition, the company created approximately 3,500 new jobs including 500 in Germany. With respect to the guidance for 2018 Rosenfeld stressed that the company had started the new year according to plan and promised to “do everything in our power to ensure that we meet our guidance for the full year 2018”. The company’s commitment to its Financial Ambitions for 2020 remains unchanged as well.

The CEO emphasized the significance of the program for the future, the “Agenda 4 plus One”, which is designed to execute the Schaeffler Group's strategy and represented one of the priorities of the Board of Managing Directors in 2017. “4 plus One” consists of four categories plus one further category which indicate the focus of the comprehensive program: Customer focus, operational excellence, financial flexibility, and leadership and talent management, and, as the 5th, overarching category (“plus One”), securing long-term competitiveness and value creation. At the end of 2017, the completion ratio of the program, which consisted of 16 initiatives until then, had already reached 35 percent; as a result, the Board of Managing Directors decided to expand the program by four initiatives to its current total of 20 initiatives. More than 1,000 employees are now working directly on implementing the program that will see the company investing a total of 1 billion euros over the next five years.

Klaus Rosenfeld presented a selection of six of the program’s initiatives in more detail to shareholders at the annual general meeting: E-Mobility, Industry 4.0, Factory for Tomorrow, Working Capital, Leadership & Corporate Values, and the Digital Agenda initiative.

The “E-Mobility” initiative is of key significance to the Automotive OEM division. Although the internal combustion engine will make up a significant share of the Schaeffler Group's market for a long time to come, its customers are anticipating that growth will largely come from hybrid vehicles and battery-electric cars in the next decade. Therefore, the objective of this initiative is to expand the product range in these segments. To this end, a new “E-Mobility” business division was created as of January 1, 2018, bringing together new and existing activities. Globally, the company will also establish three competence centers in the U.S., Germany, and China in the coming years to prepare the Schaeffler Group for the mobility of the future.

The “Industry 4.0” initiative is to the Industrial division what E-Mobility is to the Automotive OEM division. Its main focus is on expanding the product range to include complete mechatronic systems. This expertise links the two divisions as a technological bracket. Here, too, a separate unit was established that has brought together all existing activities in this area effective January 2018. This business is targeted to generate ten percent of Industrial division revenue by 2022.

The “Factory for Tomorrow” initiative addresses the question of what the factory of the future will look like providing the ability to respond flexibly to volatile markets while operating very profitably will look like; meanwhile, the “Working Capital” initiative searches out opportunities for reducing working capital with constant innovation in order to release tied-up capital to increase the company’s financial flexibility. Rosenfeld specifically stressed how much employees and executives contribute to the company’s success; for this reason, the “Leadership & Corporate Values” initiative is dedicated to the topics of leadership and talent management and, among other things, has defined six leadership essentials. Finally, the objective of the “Digital Agenda” initiative is to ensure that all areas of the company appropriately respond to the Digitalization megatrend and to connect the physical and the digital world. In this manner, the company intends to generate about 10 percent of value added using digitally enhanced products and services by 2020.

Overall, Rosenfeld considers the Schaeffler Group well positioned for the future. What was needed now was to consistently put “One Schaeffler, One team, One voice” into action as part of the Agenda “4 plus One”.

The voting results and the recorded speech of the CEO at today’s annual general meeting are available at www.schaeffler.com/agm.

Our online annual report can be found at:
www.schaeffler-annual-report.com