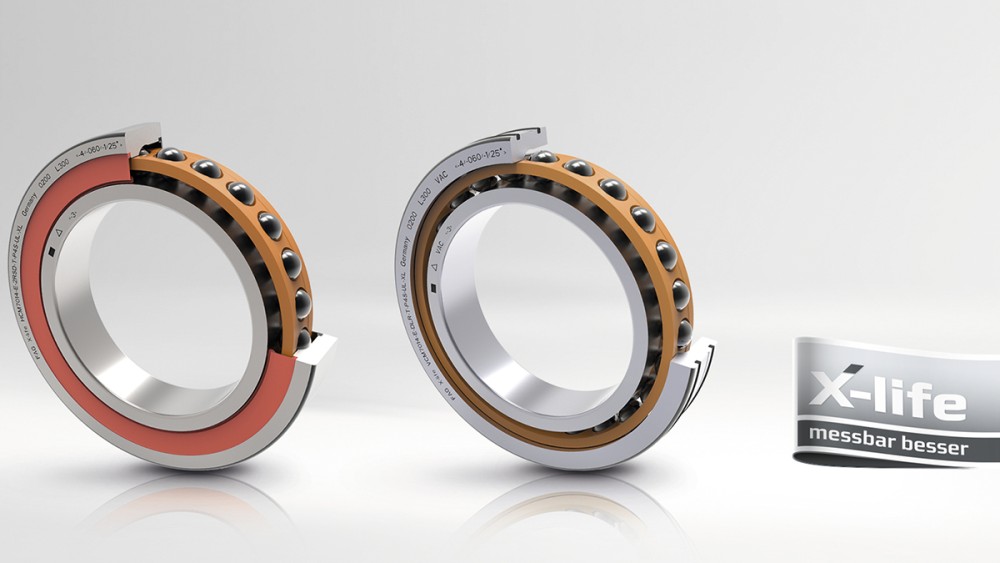 A series available in three performance classes: M, HCM, and VCM – a simple and very efficient way to match the suitability for high speeds and the robustness of the spindle bearings to customers’ requirements.

The performance capability and productivity of machine tools are significantly defined by the main spindle, whereas the suitability for high speeds, rigidity, and robustness against operational influences are defined by the spindle bearing. Important development objectives for the M-series FAG spindle bearings in X-life quality included an internal construction with particularly optimized friction behavior and a high tolerance towards rapidly changing thermal operating conditions such as those that frequently occur in motor spindles. The optimized construction greatly reduces the rise in bearing preload caused by influencing factors such as interference between the bore and the bearing, high speeds, and large temperature gradients between the shaft and housing. The new series is available in the three different versions: M, HCM, and VCM. The balls and rings of M-variant X-life High-Speed spindle bearings are manufactured from the proven 100Cr6 rolling bearing steel. This version provides a high-performance, cost-effective bearing solution for motor spindles. HCM-variant X-life High-Speed spindle bearings are equipped with ceramic balls and rings made from 100Cr6 rolling bearing steel. Thanks to its suitability for very high speeds, the HCM variant allows the performance of motor spindles to be increased.

Spindle bearings in the VCM-variant X-life High-Speed series also feature balls made from ceramic material, but with bearing rings made from the newly-developed Vacrodur high-performance material. This high-performance steel possesses a range of outstanding characteristics that make it ideal for the application as a spindle bearing. With regard to the endurance limit, Vacrodur withstands up to 35 percent higher pressures than the proven 100Cr6 rolling bearing steel. A 2.4-fold increase in the dynamic load carrying capacity in comparison to standard 100Cr6 rolling bearing steel – which represents a 13-fold increase in the bearing’s nominal rating life – has been verified under good lubrication conditions in certified tests. There is even a 25-fold increase of the operating life under insufficient lubrication conditions.

Vacrodur has a high hardness level of 65 HRC, while also offering good ductility. Smaller indentations and therefore lower ridges are produced when foreign particles are overrolled in the raceway. These can easily be reformed during subsequent overrolling due to the ductile material matrix. In tests conducted on endurance test rigs at Schaeffler’s premises under controlled contamination conditions, the operating life up to bearing failure was increased by almost 20-fold compared to the existing benchmark. These outstanding results have also been confirmed by tests carried out at the premises of several customers.

Wide range of variants and sizes

The M, HCM, and VCM series of X-life High-Speed spindle bearings are available for dimension series 70 and 719 and with nominal contact angles of 17 and 25 degrees. Three different preload options are available. Available bore diameters range from 25 to 130 mm, and 50 to 80 mm will initially be available for sealed versions. Further diameter ranges are also planned in subsequent release stages. The bearings are also available as a “direct lube” version with lubrication holes and seal rings in the outer ring.

When changing over the spindle bearings to the X-life M-series, machine and spindle manufactures can choose from three performance stages regarding the suitability for high speeds, load carrying capacity, and operating life. The longer average operating life significantly reduces operating costs for machine tools. The costs for spindle repairs are lower in relation to the operating hours. VCM-variant Vacrodur spindle bearings, in particular, can even withstand extremely unfavorable conditions for a much longer period of time than bearings made from conventional materials, significantly increasing the robustness of spindle drives.