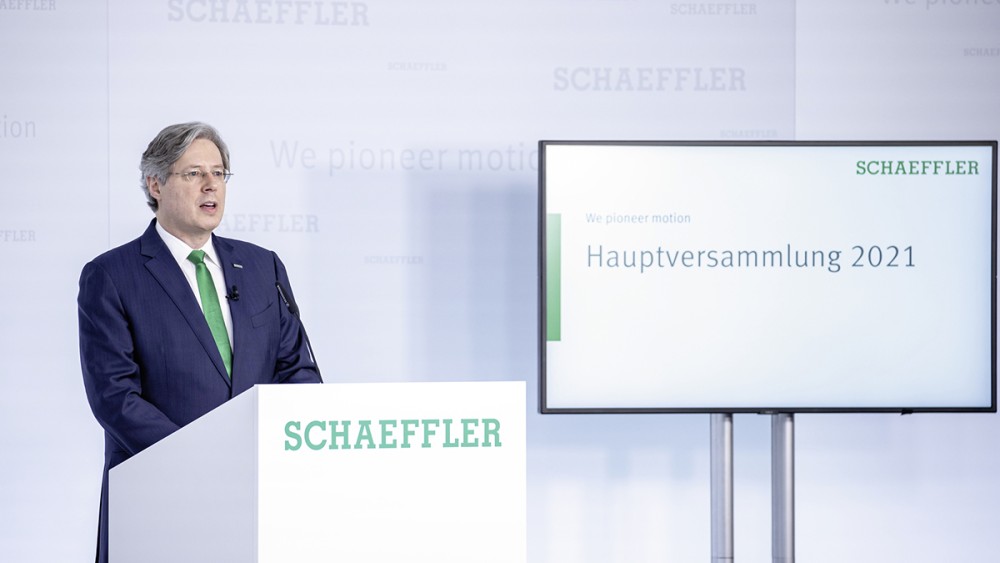 The Annual General Meeting of Schaeffler AG, held virtually for the second year running, voted in favor of paying a dividend of 25 eurocents per common non-voting share, as compared with 45 eurocents in the prior year. That corresponds to a payout ratio of about 50 percent (as compared with about 43 percent in the prior year) of net income attributable to shareholders of the parent company before special items. As such, it is at the top end of the 30–50 percent range envisaged by the company’s dividend policy.

“Last year was shaped by major uncertainties that are still ongoing,” said Klaus Rosenfeld, CEO of Schaeffler AG. “But our position as a global automotive and industrial supplier has served us well in these challenging times and has helped us weather the crisis. We are paying a dividend of 25 eurocents. That is firmly in keeping with our dividend policy and sends a positive signal to our shareholders.”

Good start to 2021 financial year
Regarding business performance in the first few months of this year, Klaus Rosenfeld noted that the Schaeffler Group had made a good start to 2021 despite the continued challenging environment. He referred to the preliminary key figures for the first quarter of the year, which Schaeffler released on April 19. The release was necessary because the figures were well above the prior year and the company’s own previous expectations.

Schaeffler will publish its interim report for the first quarter of 2021 on May 12, 2021 as planned.

Automotive Technologies successes in the e-mobility sector
The company’s successes in the e-mobility sector are particularly pleasing. In 2020, Schaeffler’s E-Mobility business division recorded an order intake of 2.7 billion euros, well above the budgeted target of 1.5 to 2 billion euros. The number of projects was also 30 percent up on the prior year, a positive trend that has continued into this year. 2021 marks the start of volume production of electric motors for hybrid modules, hybrid transmissions and all-electric axle drives. Schaeffler’s electric motor production is based on a modular, highly integrated technology platform. As already communicated, Schaeffler has received a major order for dedicated hybrid transmissions and in 2024 will start supplying entire drive units comprising two electric motors and power electronics integrated in the transmission. Moreover, by expanding its electrification offering to include the commercial vehicles segment, Schaeffler is making another important contribution to the achievement of climate and sustainability targets.

Digital business models in Automotive Aftermarket
Digitalization has become a core competency for the Automotive Aftermarket division. The pandemic has been a catalyst for the division’s wide-ranging activities that incorporate digital sales channels and business models, allowing Schaeffler to differentiate itself from its competitors. A good example of this is the highly integrated Aftermarket Cloud, which successfully addresses many different user interests. Demand for the REPXPERT online training courses offered by Schaeffler in more than 30 languages has increased by leaps and bounds. And the number of website contacts more than doubled in the fourth quarter. The Schaeffler Group expects these positive trends to continue in 2021.

Industrial achieves growth with new products and by leveraging service business
Alongside the continuous expansion of its core business in bearings and linear technology, Schaeffler sees major growth opportunities in the growing trend towards automation across all industrial processes. The Industrial division’s expertise in lightweight robotics is evident from its modular portfolio of innovative bearings, gearboxes and drive motors. These system components have a big impact on the performance of compact robotic arms and offer potential for major development advances.

Negotiations on workforce downsizing largely completed
Good progress has been made with the measures for accelerating the transformation of the Schaeffler Group that were announced in September 2020. The structural measures relate mainly to twelve locations in Germany. It is envisaged that implementation of the measures will be largely completed by the end of 2022. Following intensive and constructive negotiations with employee representatives, reconciliation-of-interests agreements have now been concluded at nine of the twelve locations. This means that Schaeffler is now in a position to implement the great bulk of the measures.

Negotiations are ongoing for the Wuppertal, Clausthal-Zellerfeld and Luckenwalde locations, where more time will be needed to find solutions on aspects such as relocation and possible sales and closures. The discussions are proceeding on a constructive note.

The employer and employee representatives agree that the workforce downsizing must take place with the maximum degree of social responsibility, through early partial retirement, internal redeployments and separation agreements. These measures, together with the voluntary exit program that ran from November 2020 until the end of March 2021, mean that the company has already achieved half of its total workforce reduction target.

Rigorous implementation of Roadmap 2025 – “We pioneer motion”
At the end of last year, the Schaeffler Group unveiled its Roadmap 2025, comprising an updated corporate strategy, an execution program and mid-term targets for 2025. The Roadmap 2025 stands for continuity and building on existing strengths, but also optimization and further development focused on new technologies and business models, along with costs and efficiency.

In addition, the new corporate claim, “We pioneer motion,” expresses Schaeffler’s commitment to continuing to shape motion and progress by being a diversified automotive and industrial supplier with global reach. This will involve even more effective use of the synergies available within the Schaeffler Group. “The Roadmap 2025 refines our strategy and aligns it with current challenges and opportunities,” Klaus Rosenfeld said. “We will implement the Roadmap 2025 resolutely and with all due rigor so that we can build an even stronger Schaeffler Group.”

“We very much regret that Ms. Soussan has had to give up her seat on the Supervisory Board for work-related reasons and extend our sincere thanks for her dedicated commitment to the Schaeffler Group. She made a substantial contribution during the past two years. We wish her every success both personally and in her future career and all the best”, said Family Shareholder and Chairman of the Supervisory Board Georg F. W. Schaeffler. “We are however delighted to welcome a renowned expert, Ms. Hasbargen, to the Supervisory Board of Schaeffler AG. Her many years of experience in the tax sector will strengthen the Board.”

The ballot results and the report of the Chairman of the Executive Board at the Annual General Meeting will soon be available at www.schaeffler.com/agm. To view our annual report, visit: www.schaeffler-annual-report.com