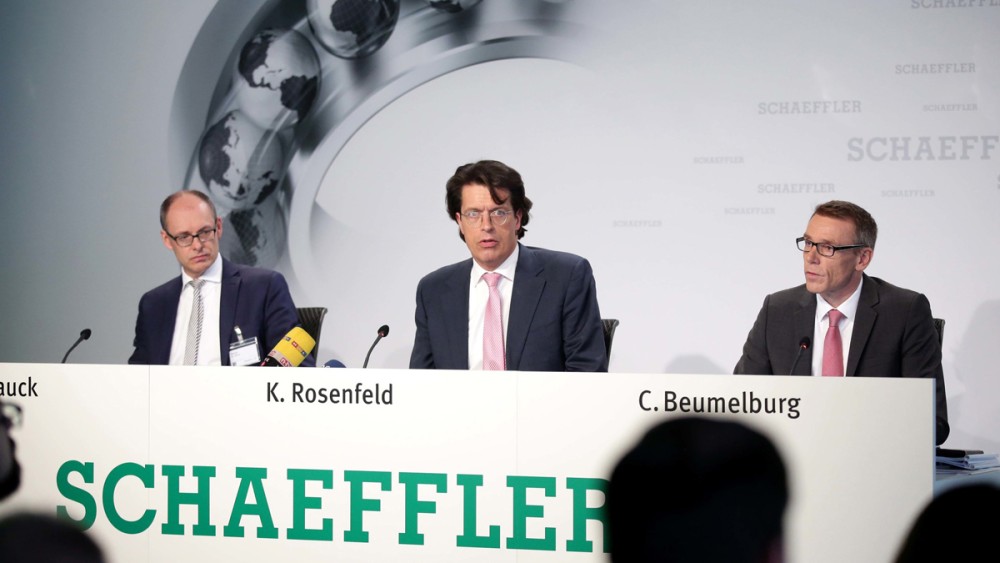 Automotive and industrial supplier Schaeffler was able to continue moving along its successful course in 2015. The company expanded its revenue by 9.1 percent to EUR 13.2 billion. At constant currency, the growth rate amounted to 3.5 percent. “We were able to considerably increase our revenue in the previous year, despite the challenging environment. We are planning to continue on our profitable growth path in 2016, as well. Our strategic concept “mobility for tomorrow” puts us in a good position to do that,” said Klaus Rosenfeld, CEO.

With its growth rate of 11.2 percent compared to the prior year (+5.8 percent at constant currency), the Automotive division once more clearly outpaced the increase in production volumes of passenger cars and light commercial vehicles of 1 percent. The OEM business benefitted from the high level of demand for Schaeffler products in the U.S. and strong growth in China in the first half of 2015. During the latter half, demand in the Asia/Pacific region picked up noticeably. The Automotive division also profited from above-average revenue growth in the Aftermarket business.

The company’s Industrial business generated growth of 3.0 percent in 2015 ( 3.2 percent at constant currency). Especially the wind power and motorcycle sector businesses contributed to the growth. The realignment of the Industrial division (CORE program) is progressing on schedule. The realignment is aimed at improving the efficiency and competitive position of the Industrial business for the long term in order to facilitate profitable growth. The division is aiming for an EBIT margin of 13 percent by 2018.

Earnings before interest and taxes (EBIT) excluding special items increased by EUR 115 million to EUR 1,676 m. The corresponding EBIT margin amounted to 12.7 percent. The special items adversely affecting EBIT consisted of the EUR 238 million provision for legal risks recognized for potential third party claims in connection with the EU antitrust proceedings finalized in March 2014 and EUR 36 million in restructuring provisions related to the CORE program. Including these special items, the Schaeffler Group’s EBIT for 2015 amounted to EUR 1,402 million (prior year: EUR 1,523 million) and the EBIT margin was 10.6 percent (prior year: 12.6 percent).

The Schaeffler Group has significantly raised its total capital expenditures, investing EUR 1,025 million (prior year: EUR 857 million) in new products and technologies as well as in the expansion of the group’s global production network. This represents an increase of approximately 20 percent from the prior year. The company’s capex ratio (capital expenditures as a percentage of revenue) was 7.7 percent (prior year: 7.1 percent). In addition to the construction and expansion of new manufacturing locations such as the ones in Chonburi, Thailand and in Puebla, Mexico, capital expenditures made in 2015 also related to the “European Distribution Center” (EDC) project.

With its listing on October 9, 2015, the company has laid the foundation for successfully continuing its profitable growth in the coming years. The proceeds of the listing have helped improve its equity ratio and reduce its debt to EBITDA ratio. Net financial debt fell by EUR 889 million to EUR 4,889 million (prior year: EUR 5,778 million). The adjusted net debt to EBITDA ratio was 2.1 at December 31, 2015 (prior year: 2.6).

The Board of Managing Directors and the Supervisory Board will propose a dividend of EUR 0.35 per common non-voting share to the annual general meeting. This represents a dividend yield of 28.9 percent of net income before special items attributable to shareholders. In addition, the company intends to exercise the option to pay a special dividend that was created in connection with the listing. A special dividend of EUR 0.15 per share will be proposed to the annual general meeting.

The Schaeffler Group anticipates revenue growth of 3 to 5 percent at constant currency in 2016. The group expects its Automotive division to continue growing faster than global automobile production of passenger cars and light commercial vehicles in 2016. In the Industrial division, sluggish order intake in the fourth quarter 2015 and the still strained economic environment in certain sectors suggest flat or slightly declining revenue levels in 2016.

Based on these considerations, the company expects to generate an EBIT margin before special items of 12 to 13 percent in 2016. The Schaeffler Group is anticipating approximately EUR 600 million in free cash flow for 2016.

As Klaus Rosenfeld explained: “Even if the environment remains challenging, we still see good growth opportunities for our business. Our extensive technology expertise and comprehensive systems know-how make the Schaeffler Group a valued development partner to the automotive and industrial sectors. We want to further expand this strength.”