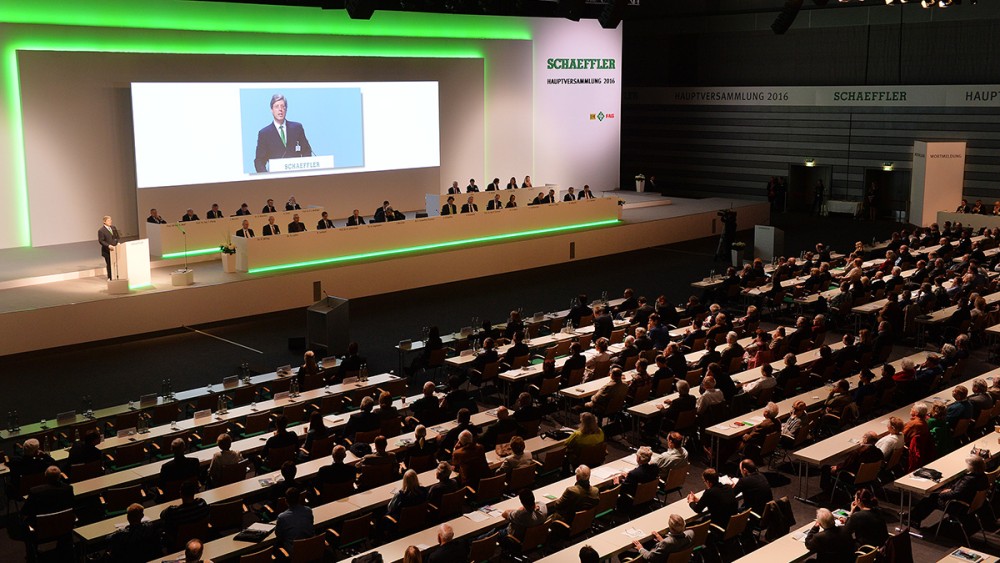 The Chairman of the Schaeffler AG Supervisory Board, Georg F. W. Schaeffler, welcomed the shareholders and the shareholders’ representatives and said: “The first Annual General Meeting after our initial public offering is another milestone in the history of our company”. In his speech, he referred to the company’s 70-year success story and honored, in particular, the contribution of his parents, Maria-Elisabeth Schaeffler-Thumann and Dr.-Ing. E. h. Georg Schaeffler. The development of the company from its foundation in 1946 until the present day was shown in a film.

Klaus Rosenfeld, CEO of Schaeffler AG, reported on the successful 2015 financial year and particularly focused on the strategy concept “Mobility for tomorrow” in his presentation. This strategy concept, which was developed at the end of 2013, includes four areas – “eco-friendly drives”, “urban mobility”, “interurban mobility” and the “energy chain”, which the Schaeffler Group wants to focus on in the future.

He also mentioned that the company is undergoing a shift from a component manufacturer to a system manufacturer. “A good example in this respect is the electromechanical active roll stabilizer developed by Schaeffler. This system makes vehicles more stable during cornering and provides drivers with increased safety and driving comfort”. Schaeffler was awarded the German Innovation Award for this innovation at the beginning of April. Further focal points in this context are electric mobility and the optimization of the internal combustion engine.

The Schaeffler group is taking a proactive approach to the increasing trend towards digitalization: “Digitalization is an important driver for developing new products and services, opening up new business fields and optimizing processes. We see major opportunities particularly for our industrial business here”, explained Klaus Rosenfeld. All relevant aspects are to be included in a “Digital Agenda”, which will be a fundamental component of the “Schaeffler 2020 Roadmap”.