The recovery in the first six months was most clearly visible in the revenue trend of the Automotive Technologies division which reported constant-currency growth of 34.9 percent. All four regions reported growth rates in the double digits. The improved economic environment resulted in second-quarter constant-currency growth of 67.5 percent in the Europe region and 90.3 percent in the Americas region. The coronavirus pandemic had severely affected business in both regions in the second quarter of 2020. The growth rate for the Greater China region of 10.7 percent at constant currency was more moderate, partly due to the higher basis for comparison in the second prior year quarter. The Asia/Pacific region reported constant-currency revenue growth of 58.7 percent.

EBIT for the reporting period was positively impacted by 22 million in special items mainly relating to the partial reversal of provisions recognized for structural measures under the Roadmap 2025 divisional subprograms. The targets with respect to downsizing the workforce and sustainably lowering costs remain in place unchanged. Implementation of the structural measures announced in September 2020 is proceeding as planned. Negotiations with employee representatives have now been concluded at all locations affected in Germany except one.

Automotive Technologies – strong growth in E-Mobility
The Automotive Technologies division generated 4,365 million euros (prior year: 3,264 million euros) in revenue for the first six months. The constant-currency increase of 34.9 percent is due to considerable growth across all business divisions and regions. The recovery of global automobile production was held back especially by worldwide supply shortages of semiconductors, particularly in the second quarter; to some extent, renewed restrictions related to the coronavirus pandemic had a similar adverse effect. Automotive Technologies division outperformance was at a strong 5.7 percentage points, with all regions contributing. Order intake for the first six months was stable as well compared to the improved environment, totaling 5.4 billion euros. The E-Mobility business division won 2.1 billion euros of these orders, already meeting the full-year target for 2021. The division is planning on an order intake of 2-3 billion euros per year for the E-Mobility business division starting in 2022.

This trend was primarily driven by considerably higher volumes in the Europe region, where revenue rose by 20.0 percent at constant currency, and by the Americas region, which reported constant-currency revenue growth of 38.8 percent. The prior-year basis for comparison is low in both regions due to the coronavirus pandemic. Constant-currency revenue growth amounted to 44.6 percent in the Greater China region and 46.3 percent in the Asia/Pacific region.

The Independent Aftermarket business expanded considerably in the Central & Eastern Europe, Western Europe, South America, and U.S. & Canada subregions and grew considerably in the Greater China region as well. The revenue trend for the reporting period also reflected the expansion of the e-commerce business there. The growth reported by the Asia/Pacific region is mainly due to the recovery of the Independent Aftermarket and original equipment service business in India, partly due to the low basis for comparison especially in the second quarter of 2020.

The Industrial division earned 208 million euros (prior year: 141 million euros) in EBIT before special items in the first six months.

The considerable improvement in EBIT margin before special items to 12.0 percent (prior year: 9.0 percent) was largely driven by economies of scale.

Strong free cash flow – considerably ahead of prior year
Free cash flow before cash in- and outflows for M&A activities for the first six months increased to 243 million euros, considerably ahead of the comparable prior year period (-148 million euros), due to good operating performance. Restructuring expenditures and an increase in working capital as a result of the increase in business activity represented the main offsetting impacts.

Guidance for 2021 – full-year outlook raised again
The Board of Managing Directors of Schaeffler AG decided on July 26, 2021, to again raise the full-year outlook for 2021 and now expects revenue growth of more than 11 percent at constant currency (previously more than 10 percent). Following a strong first six months, the company is taking this step despite persistent uncertainties regarding the second half of the year that are currently difficult to estimate.

Additionally, the company now expects to generate an EBIT margin before special items of 8 to 9.5 percent (previously 7 to 9 percent) in 2021. The guidance for free cash flow before cash in- and outflows for M&A activities has been raised as well; more than 400 million euros (previously more than 300 million euros) are expected.

The company now expects the following for its three divisions: 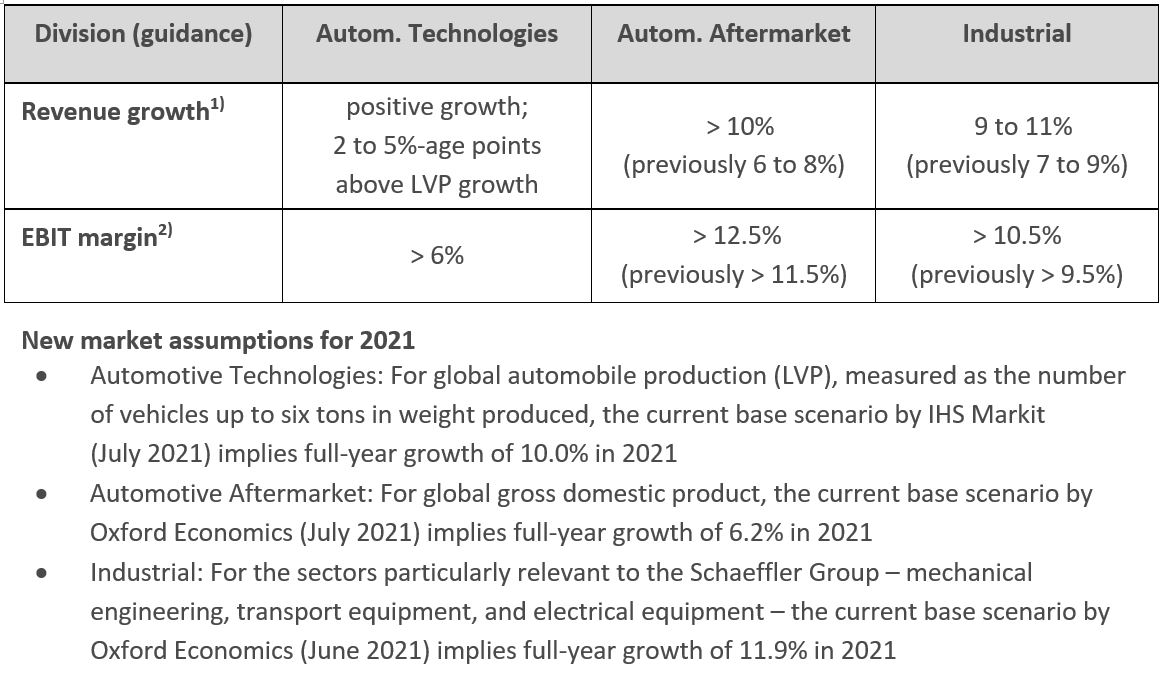 1) at constant currency; 2) before special items

“Having also closed the second quarter better than expected, we have adjusted our guidance upward again. We are confident of being able to achieve our targets for 2021, but continue to remain cautious. The execution program for our Strategy 2025 is making good progress. Implementation of the structural measures initiated is proceeding as planned. Given the uncertainties regarding the second half of the year, our focus for the rest of the year remains on discipline with respect to capital and costs,” stated Klaus Rosenfeld, CEO of Schaeffler AG.

You can find a press photo of Klaus Rosenfeld here:
www.schaeffler.com/en/executive-board